Pre-order my debut album via Pozible! 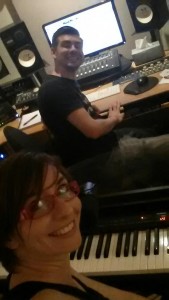 Recording has begun on my debut album! We have almost completed the first single and now we need your help to make more music.

You can pre-order the digital or physical album through my Pozible campaign. In addition to the music, there are other rewards such as house gigs, merch and visiting me in the studio while the album is actually being recorded. All backers who pledge at the $20 level or higher will get a discount code to use for my March 7 gig, getting you in for free.

As always with Pozible, it’s all or nothing funding. That means that if I don’t reach the target, nobody gets charged, I don’t get any money and the album doesn’t get made. I’m certain that you don’t want that to happen (and neither do I!).

As you can see in this picture from day one in the studio, Josh and I are very excited about what we’ve created so far. This is a much more ambitious project than my previous work, both in scope and in sound, and I can’t wait to share it with you!

And don’t forget my upcoming gigs:

Next post: First taste of the debut album! Pre-order now!