Plenty of exciting developments going on at the moment!

Shane and I went to see The Jane Austen Argument play in Marrickville last Friday night, supported by Brendan Maclean (who played the gig with me in April). The gig was awesome and we were in the front row, which was very cool (thanks for saving us a seat, Ian Karina!) (that was my fault, Karina. I told Helen the wrong thing. So sorry! – the Web Monkey)

After the gig, we went up to Jen and Tom from The Jane Austen Argument to get them to sign the EP we purchased. I was expecting to have to introduce ourselves with a little “Oh we’ve conversed a little on Twitter” missive, but as soon as we got to the signing table, they greeted us like old friends. “Oh it was so nice to see friendly faces in the front row! How are you? How’s your music going, Helen?” I have to admit, I gave an internal squee! So we chatted a bit about my progress and their impending trip overseas and this all led to my being invited to play at their “Twitnic” (Twitter-organised picnic gig) on the Saturday. The photo below is from the Twitnic. Hopefully there are more to come.

I am feeling very blessed to have all these fabulous musicians around me that believe in my work!

(if you’re on Twitter, be sure to follow Brendan as well as Jen and Tom from the Jane Austen Argument. They’re brill) 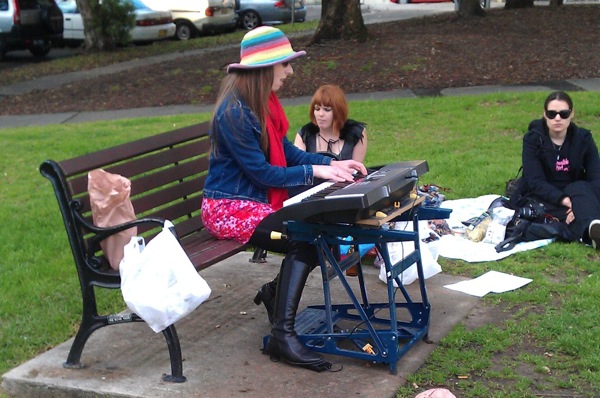